Country Side Antiques is located on a small rise of land which was originally granted as a 600 acre property in Empire Loyalist days. In the following decades the farm flourished as part of the small community of Millar’s Corners, which at one time included not only the local farming community, but also boasted a school and other small businesses including a local cheese maker! 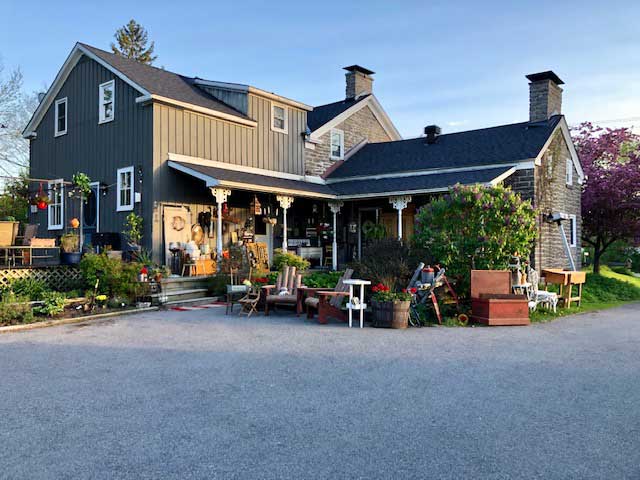 County Road 44 was also historically part of the original Highway 16 between Ottawa and Prescott before the highway was re-routed in the second half of the 20th century and long before Highway 416 was built. Today the locals still refer to the road as “old 16”.

The log house, which now contains part of the collection of merchandise available, was the original homestead built on the property and is believed to have been erected sometime in the 1790’s. Although it has been updated over the years it still evokes the rough and tumble times of those pioneering days.

When you enter the shop in the stone house you are in the original portion of the house which was constructed by Scottish stonemasons starting back in the 1830’s. The rest of the house was slowly built on to it and the final structure was fully completed in the 1850’s. The area of the shop then became the summer kitchen, complete with a stone sink under the corner window, carved from a single block of stone.

Prior to the age of the automobile, people needed somewhere to keep their buggies and sleighs clean and dry and out of the harsh elements. As a precursor to the modern garage, carriage houses were common. On farms and in small towns original carriage barns are still in use, having been transformed into garages and workshops. At Country Side Antiques you’ll find the carriage barn contains all types of treasures for you to buy and enjoy.

What Our Customers Say